The current racist trend is to attribute the COVID-19 to the Chinese, holding them responsible for the global catastrophe that followed. The Chief Marketer behind this campaign is the American President himself and perhaps for a good cause. Holding the Chinese population accountable for what has transpired in the months after is equivalent to blaming a child from a broken home for her bad grades. The conspirator in this catastrophe is the saving-your-face regiment, the Communist Party of China (CPC). A party that has some uncomfortable questions to answer:

The CPC will of course deceive the world with its debt, trade and manufacturing muscle, after all China has to deliver what we consume. This is a unique situation where the whole world mollycoddled by the consumption capitalism has to suddenly see why its faith in constant purchasing was flawed. The secret was in the factories hidden from from the eyes of the consumers. Designed in California, Manufactured in the P.R.C.. It also shows the fact that a brutal, authoritarian State has slowly been amassing enormous and irreversible power over the last decades and that it is time to examine our choices.

The future of the world and the internet seems to rest on the infrastructure provided by Chinese companies. China has now attained a starture worthy of imitating. With the eradication of the first wave of COVID-19 in the country through its autocratic means, China has a steady supply of countries of wanting to emulate the same model with the same privacy invasive technologies. By also claiming a moral victory against the virus (and playing part victim), China is looking to further cement its place as a trusted ally in global politics. This is a role that America is very happy to cede to China at the moment – while Trump flexes the CPC slowly creeps up in his oversight.

We should see for what it is, a surveillance state with little regard to human rights. The Communist Party of China is the architect of this glowing global status and it is not in the mood to relinquish the hard gains. The CPC with its history is a dangerous master to be in power, just a decade ago the War on Terrorism was still in full swing and democracy was the solution to all the problems in the world. We need to decide which ideological doctrine shapes our future international society. Unless it has some degree fairness and equality at the heart of it, the Communist Party of China doesn't have a chair at the table.

Death of the Global Superhero 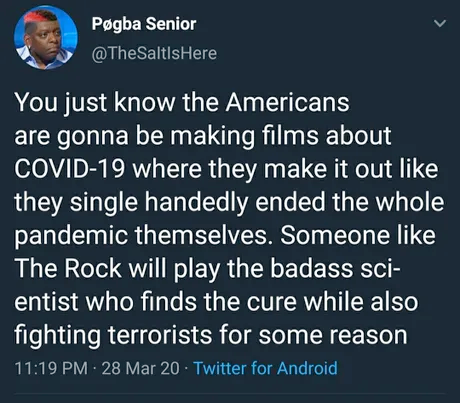 In the next years there will be a Hollywood blockbuster with sad faced, somber actors who will play doctors and kind Samaritan. The cast and crew will encompass the whole racial ensemble of Hollywood actors. Billions will be minted, award ceremonies will be awash with tearful messages of support and celebrity charities will be overflowing with money. Black lives will matter, brown lives will matter, pink lives will matter and what not. There will be catchy slogans telling that the world cares, this movement will be copied by the movie industries elsewhere — similar stories of heroism and imitation will pop in India, China and Nigeria. Real questions of inequality, political shortsightedness and sheer human stupidity will be replaced with Hollywood's Will to Live, and the beauty and brilliance of life will be exhorted.

The reminder to all this egoistic future celebration should be: the virus has made us prisoners of our own homes and selves. There are things stronger than us that are smaller than us, and we are not invincible nor are we our economies.

The sap stories peddled by America for decades have come tumbling down in the face of a crisis the country has crumbled under. There are no glamorous American heroes that save, all the flag wielding patriotism and in your face soft power posturing can now stop. Same is the case with the Chinese or Indian national heroes. The complacency of China, the governments should also be considered. The Communist Party of will be winning the first prize with commendable participation from the Republican Party in the US and whoever the fuck is ruling in Iran. They are collective evidences of the sheer ignoramity with which political systems work without considering the people. If future wars have to be waged then they have to be in the schools and then in the countries. The enemies have never been outside, they were always with us, laughing in plain sight.

There needs to be a cultural upheaval to begin with. The rise of the American superhero, globe-trotting billionaire and the influencer can finally have some checks, the fantasy is only an inadequate extension of the capitalistic muscle. This is not something that is isolated to the Americans or the Chinese but the “hero” syndrome prevails everywhere. When we look for hope we find none because the sources of this hope have been long confined to the unglamorous sidelines. This is the time to take a call and examine our heroes and how we worship them, as with the gods they have come out to be fake.

The global recession that will surely follow will be the biggest hope. The mindless consumption will fall down and so will the way we approach media and films, what would give us hope in the hopeless times sure to follow? The class hatred will only become deep-rooted and so will be the inequality. If the recession becomes something deeper and far more tumbling, the hunger will provoke deeper questions on the way the world around has been narrated to us. Structure upon structure based on the selfish greed of what it is to be a person: the collective and the community destroyed for all purposes except for the town hall meetings Mark Zuckerberg seems to prefer. Now between all the solidarity that the government seems to be demanding of us and asking us to act in the best interests of everyone else, it is important to question the model of individualism much of modern society is built on.

This individualism is also the breeding ground for the (hero)ine, dismantling the ideology behind will help us pave way for a more hopeful blueprint of who we are and where we want to go as a collective.