On Anarchism: The role of disobedience in a democracy. 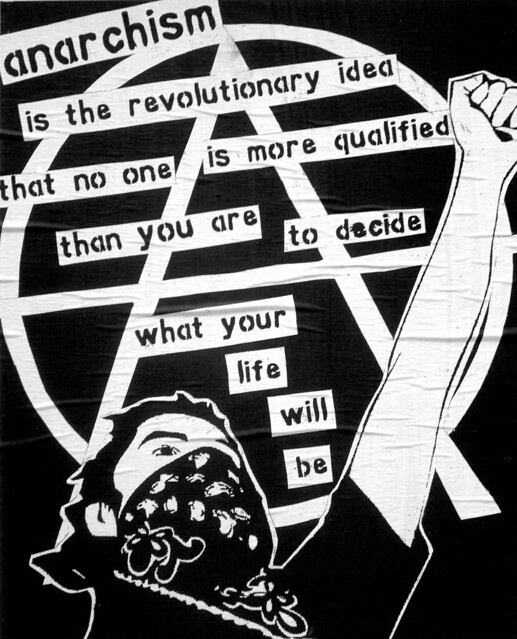 Anarchy or anarchists have a lot of bad reputation in the media, with constant association to chaos, stone pelting and acts of vandalism. It is often misunderstood with protestors on both sides of the political spectrum labelled as anarchists in American media and in extension, world over. Anarchism has for long been a hard political concept to define and to accept, the question remains what events in the past decade have morphed from anarchic ideas and helped bolster democratic participation and principles. The word anarchy is etymologically derived from the Greek work anarkhia, which means “without a ruler”, strives to be a political thought which functions with hierarchies of power. The definition explains why anarchism does not sit well with established analogies of power and the modern democratic State which has hierarchies built into its bureaucracies and decision-making clusters, making it hard to imagine a system without the structure of hierarchical leadership.

Roughly 2.4 billion people live in electoral and liberal democracies across the world with the rest living in a mix of electoral, mixed, and other kinds of autocracies. Of this, India is the largest democracy with 1.3 billion people which has been classified as an electoral autocracy as of 2020. Inequality, democratic discontent, and populism have been identified risks for democratic backsliding. The gap between the richest people in the world and everyone else has been widening in the past 30 years, where the poorest half of the world population have seen only 1% increase in global wealth while the richest have seen a 50% increase.

Some studies show that economic inequality is a barrier to the democratization process because of the economic elite’s fear of excessive re-distributive reforms under democracy. Through the competition between different economic elites’ democracy emerges, thus positively associating income inequality to democratization, though they do hint that the elites are more powerful when they control more of society’s wealth.

Here the definition of democracy serves as a handy principle, where democracy is a method of collective decision making at an essential stage of the decision-making process where all the participants have a kind of equality. Depressed voter turnouts have been linked to economic inequality, with all income groups voting less. This points to a reduced democratization, with the power concentrating in the hands of a few who profit from the non-participation of a sizable majority of the population. The effects of economic inequality and loss of democratic principles is a problem that cannot be ignored.

According to the Russian revolutionary anarchist Bakunin, a State without the domination of one class by another is unimaginable and as a result a State without slavery is unthinkable, while a more modern interpretation of anarchism based on the critique of liberalization argues that all States are criminal organizations. A common misconception is that chaos and anarchy go together – but that does not relate to the social thought of Anarchy, as anarchists typically believe in high levels of democratic organization, just that it is constructed with bottom-up model. States level societies on the other hand are relatively new introduction in the human political organization, having existed only for the last 5000 years, a recent development when considering modern humans existed for over 300,000 years. This suggests that modern States should be considered as a mixed experiment than an absolute structure. Thus, anarchic activity focuses on refusing to recognize the legitimacy of the structure of power, as the participants acknowledge that they are inherently free from any kind of State obeisance. It is in this case that anarchic principles of collectivized groups forming to serve their immediate interests, invested in good of the people.

Changes to inequality are rare occurrences and they're often associated with other dramatic consequences such as wars and economic depressions. Also, policies to reduce wealth inequality are rarely enforced as the can result in a total upheaval of the entire political system and can lead to severe political events such as wars. This entrenches populism, as populists’ message that elites are corrupt and that the people need better representation, a key indicator in countries such as India under Modi, USA under Trump and Hungary under Orban. The voters supporting the populists want a radical change from the usual politics without their untoward repercussions, that is losing cultural or economic status.

One way to oppose populists is to vote and the other is to take principles of anarchic thought and question the very idea of obedience. This brings forward the question if obedience is simply a pragmatic choice or a strategic one but on the ideas of loyalty to the State and identification with its laws. If the State itself is illegitimate, then participation is merely a choice and not one of a duty. Some might argue that anarchism is incoherent but the issues it brings up are deep, questioning the traditional notions of sovereignty and political obligation, making one wonder about things taken for granted. Anarchism provides scope for organization based on voluntarism and mutual help as well as consensus. From this vantage, anarchist communities can work well if they can shield themselves from coercive authority.

Given the challenges to democracies around the world, it helps understanding different forms of collective organizations and their role in the democratization process, and anarchic movements with their focus of individual freedoms and collective participation can be a healthy paradigm against the oppression of the elites.