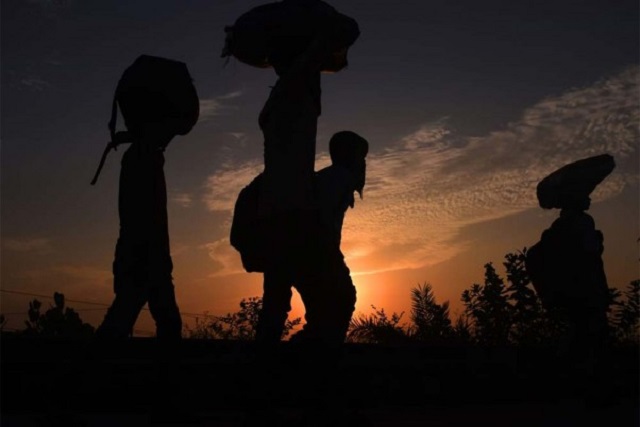 Greatness. Glory. Us, the people. India, the land of the ancient great. Superpower, $5 trillion economy. A land of beauty, color, mystique, good food and IT coolies that get the job done. India, shining and proud – a collective of people who lead and inspire the world. These are all PR terms that are supposed to evoke pride in who we are, the stamp of a passport on our souls. When this rosy idea of the country is challenged, through accounts of poverty, income inequality, rising authoritarian streaks it becomes a cause to be fought against.

India like most nations today suffers from jingoistic nationalism that is formed on thoughts and ideas that not everyone has access to. Let us examine the term “Migrant Laborers” which in itself is devoid of any moral or meaning. These are the masons, carpenters, pani-puri wallahs and load bearers that camouflage in the brick and concrete dust in countless constructions sites across the country, forming the backbone of the informal Indian economy that is 81% of the total workforce.

The word “laborer” itself serves a negative function in the Indian middle-class discourse – they are still seen as the low caste (regardless that according to the Article 14 of the Indian constitution, discrimination according to caste is illegal), overpopulating and not worthy of an equal status. A poor that brings down the name of the country through their lack of effort. The middle and the political class are far removed from what poverty means, it is “those” people that inhabit the corners of their eyes, almost polluting their line of sight. The millions of middle class Indians living abroad or even working cushy jobs in metro cities are not migrants workers, no. They are Indians. The migrant laborers are Indian but not really, they will be the soldiers for future wars if needed, but people they are not.

Here lies the problem with Modi government's response to the COVID-19 crisis. It was addressed to the middle-classes of India who had enough resources to survive the lockdown but the poor were left with nothing and nowhere to go. There was no aid for those who needed it the most. The rules issued by the Modi government by now seem arbitrary and without any scientific precedent:

From the limited information available in the public domain, it seems that the government was primarily advised by clinicians and academic epidemiologists with limited field training and skills. Policy makers apparently relied overwhelmingly on general administrative bureaucrats. The engagement with expert technocrats in the areas of epidemiology, public health, preventive medicine and social scientists was limited. – Indian Public Health Association, Indian Association of Preventive and Social Medicine & Indian Association of Epidemiologists

Taking into consideration even the survivorship bias and assuming that the government has acted quick, the current spike in cases just when the lockdown is supposed to end and the spate of the migrants still far away from their homes are still critical failures that could have been avoided with scientific consensus and proper planning. We can see the results in the laborers that were hosed with chemicals, left to struggle without food, shelter or security for weeks at an end in cities that they could never call home. Why weren’t the migrants first ferried to the villages when the cases were the lowest?

“If the situation is not handled in these 21 days, the country and your family could go back 21 years… Several families could get devastated for ever… This virus spreads like wildfire… There is no other method or way to escape Coronavirus (except social distancing)… Jaan hai to jahan hai… Carelessness of a few can put the entire country in jeopardy.” Modi, March 24th 2020

Modi in retrospect looked like he was making a political gamble, if the lockdown somehow managed to eliminate the virus from the populace, he would’ve been hailed as a hero furthering his curated god-like image. But that’s not how viruses work, there was sufficient literature evidence by around the third week of March that the virus is here to stay. By the end of May the mask of foolishness and image the government has been hiding behind for two months fall apart. Daily cases are reaching a new peak everyday and by all measures the lockdown can be touted as a failure. The spin from the official mouthpieces of the government focuses on the recovery rate and how the quick action to shut the country off has paid dividends because the hospitals now aren’t full. But who is to believe the statistics that come from governmental agencies? When the government itself is in denial of inadequate testing and community transmission (”it’s a question of semantics”). With an average of 7000+ cases in the last days of Lockdown 4.0 the government is in frantic need of good public posturing. With that burden we are presented with Unlock 1.0 which has the same function as the previous lockdowns, to boost the image of the government and not saving the people.

How can we as Indians harp on our glory and feel united when the disenfranchised have been exposed in such glaring light? The natural chest thumping that the BJP resorts to when provided with a problem is absent from the discourse. The party leadership will ignore the questions about the logic of the lockdown, the situation of migrant workers, inadequate testing because how can they bring themselves to explain that India is for them a land for the few? The Indians the BJP harps about are not walking in the streets with their humble belongings, they don’t have glamour of working in the cold battlefields of Kashmir or Siachen. The laborers have metaphors that those in the higher echelons in Indian society use for denigration and shame.

For a government that always likes to consider itself better off than Pakistan or Saudi Arabia, this is time to look and learn from countries that have handled the crisis better. Germany, South Korea and Taiwan have all handled the crisis with humility. They thought about their children, about their aged, their disadvantaged and their disenfranchised. It is not hard work, after all it is the job the government has been elected to do.