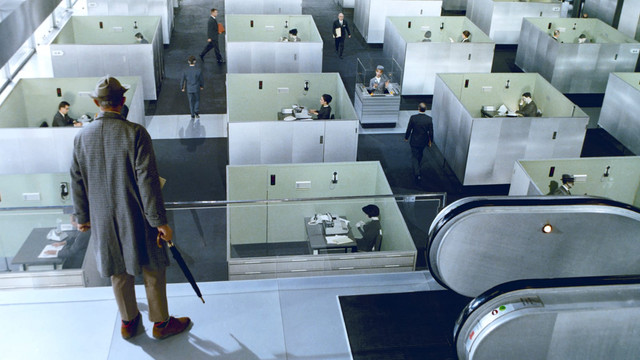 Canned tomatoes, packaged fish, a bag of chips, a bag of screws, a box of nails. Sitting in a bus, a train, an office space – we the people are the industrial cousins we created. Closer and closer to efficiency: produced, packaged and transported each day to convert invisible parts of ones self into “work” which in turn translates itself into money which we can use to buy things to produce, package and transport ourselves back into its strange, lifeless self for another day and then another.

Why do we work? What meaning does the work we do really have? I think of all the lofty work I could be doing right now but in the longer time frame, would it even matter? Going to work feels like playing a video game, sometimes it also feels like a way paying debt to faceless gods. This has to be the Sisyphusean punishment Camus talks about, endless interaction with shapes, patterns, numbers and egos. Is it for the money? Not everyone can have money can they? Otherwise money loses its value. This scarcity we created out of the nothingness all other species wander about – a scarcity made more profound by the immense self importance we draft in every Constitution.

Work is about working through a network of people – the same network that becomes a society, a people, countries and organizations. Work is rarely a solitary thing, we are rarely (if) ever solitary. When we don't meet then the result is usually hidden labour that toils for us, modern slaves with a uniform and no identity. This is a digression – as work involves levels, a kind of caste system that everyone confirms to. Money means a level-up: the harder you mine, the higher you go. The paths between people, the stories we tell ourselves.

I wanted to say that work is a cynical aspect of life – that the life behind the person who works has no inherent value. It is a derived value, the net value of a person's life. I have a certain point to which I am sold. A homeless man has one and the President/Chancellor has another. I have one and there's a million other onion layers. But life means nothing here too. The best example to this anomaly is the homeless guy, drunk on the church stairwell. There cannot be a more iconic imagery, where even our Gods do not care about our suffering.

I find work as being an essential antidote against pessimism at the heart of our lives: which is to live alone on this strange planet. We have to embed ourselves into ignorance and drama for which we have to build walls to sleep inside. What happens in our mental lives is almost irrelevant. We are not the masters of this planet, that is a very egoistical expectation. And we are collectively carrying the burden of that egoism. This is also at the heart of modern capitalism, while on one end everything is individualized the operations side of it sees people in faceless packs, stripping them of the very individual self that makes them consume in the first place.